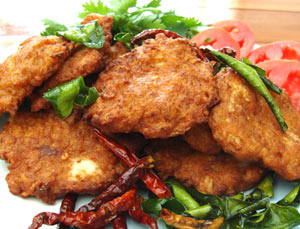 A simple “Pork Burger” doesn’t quite describe “Thai Pork Burgers” aka “Tod Man Moo” this is a light and fluffy pork burger recipe, with a hint of spice provided by a measured amount of red curry paste, and a hint of lime in the oil provided by deep fried Kaffir lime leaves.

In the world wide sense, Pork Burgers are not generally as popular as beef burgers, but in Thai cuisine the opposite is true. Thai’s also make burgers from fish too. I have tried many pork burger recipes around the world but I have to say this is one of my favourites as it is the lightest and most flavoursome but also very versatile in how you can adjust the flavour to suit your mood.

Although Thai Pork Burgers (Tod Man Moo) are deep fried we keep the recipe in our section of Thai BBQ Recipes purely because its something that would serve up well with a barbecue and quite frankly Pork Burgers would not fit in any other category!

How to Make Thai Pork Burgers 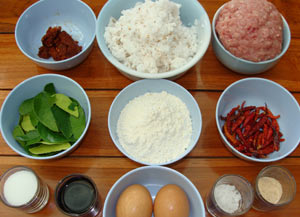 Preparation:
Soak your dessicated coconut in warm water for a few minutes enough to moisten the idea is to reinstate to freshly grated condition
If you want to use fresh Coconut like we did see How to Make Coconut Milk for instructions on preparing the Coconut
Mince up the pork as per Thai Minced Meats Video
De-vein Kaffir Leaves see Kaffir Lime Leaves Video
Throw all the ingredients except the chillies, lime leaves and oil into a large mixing bowl and mix well together, starting with the coconut and chilli paste, then eggs etc.
Adding tempura flour last as needed to achieve correct consistency (see video tutorial) and leave to stand for fifteen minutes or more

Cooking:
Starting with a hot wok of oil (or sealed fryer because they spit) throw in the Kaffir lime leaves until curly and crispy, they will darken, remove to drain, good alternatives in the video tutorial
Do the same with the dried chillies, and leave to drain
Next form the pork into small flat patties and lower into the hot oil, turning frequently until golden brown, remove and leave to drain.
Important tip in the video tutorial at this point…
Continue this process until you have as many Thai pork burgers as you require
Any remaining mixture can be saved in your fridge for 2-3 days…. Done!

Serving:
Serve them up on a plate with some coriander, cucumber and tomatoes and a nice little bowl of Nam Pik Ta Daeng aka (Red Chilli Sauce) for dipping. You would typically serve this pork burger recipe either at a barbecue or at home with some stir fried vegetables and maybe a nice spicy soup like Tom Kaa Gai (aka Coconut Chicken Soup).

We also have a delicious BBQ Sauce – sweet, spicy and sour that goes well with Pork Burgers and don’t forget we have a full range of Thai Sauce Classes.   Another BBQ recipe- Beef Waterfall Recipe which has its own fantastic marinade and is one of our many Thai BBQ Tutorials. and you can use the beef in a warm beef salad too.

Our Thai Food Blog covers many recipe and indeed there is more usful information on this Pork Burgers Recipe too.

Khwanjai’s Top Tips:
This video tutorial is packed with Khwanjais tips, but the one thing we didn’t mention is using “Tempura Flour” is a must, it makes the burgers light and fluffy which you will not achieve with ordinary flour.

Even with my comments above you should still do the test burger, the video makes that clear.

And if you want to use Basil instead of Kaffir Lime leaves then Sweet Basil is better than Holy Basil but mint works too!!

There’s a fishy version of the recipe below with instructions how to make the changes and a sauce to go with it.

We were obliged to use fresh Coconut as you will see in the video which was younger and wetter than was best so you will see we had to make some adjustments to the recipe. If you are using dessicated coconut the recipe ingredients amounts should be spot on for you.