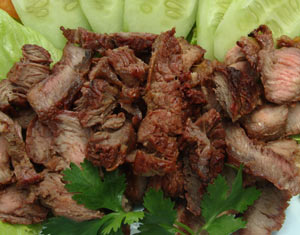 Beef Waterfall is interestingly named because as it cooks the oil drips out of the fat in the meat onto the barbecue causing it to flare up, thus resembling a waterfall.  Nam-Tok  (water-fall).  Strictly speaking Nam is the word for water and not oil but “hey ho” that’s Thai style.  So you need a nice marbled chunk of beef

Frankly, there are many misrepresentations of this recipe online.  “Nuea-Yaang-Nam-Tok” is “Beef-BBQ-Water-Fall” and not to be mistaken with the salad which is made using this BBQ beef.

So TWO tutorials in one: We’ll explain how to make the Waterfall Beef “Salad” which is served straight after cooking as a warm beef salad.

The salad version is exactly the same as this tutorial right up to cutting the cooked meat; you dress it again with the BBQ Sauce Isaan Style, and it is eaten as a salad.  The Salad can include anything you like veggie-wise and in this tutorial we just show a very simple salad.

The most important factors for making this bbq beef recipe a winner is use a nice chunk of marbly beef (not too lean) and then Khwanjais special BBQ Marinade for Beef Waterfall. You may like to take a look at our other BBQ Recipes and also our BBQ Sauces including some special Thai dipping sauces.

How to Make BBQ Beef Waterfall 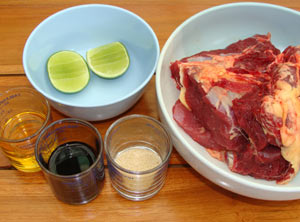 Preparation:
Slice the beef into steak sized slices for the barbecue
Give them a good pounding with whatever comes to hand (rolling pin, steak tenderiser etc)
Next mix in a bowl with 2 slices of lime juice see Cutting Lime Video Tutorial
Add chicken stock, seasoning sauce and sesame oil and leave for 30 minutes to several hours

Cooking:
Using a mature barbecue, place meat on top to cook, turning regularly so as not to burn the outside.
If you have a nice piece of marbly beef the oil will dribble out and fire up on the coals hence the name “waterfall”
Remove when cooked through, it should still be very soft and a slight pink centre is perfect

How To Serve:
Slice the meat into bite sized pieces whilst still hot and serve on a bed of lettuce with any other veggies of your choice.  That’s it….. How To Make Beef Waterfall in one easy lesson…. Done!

Waterfall Beef Recipe is eaten traditionally with friends and beers as a BBQ nibble and is not to be confused with Waterfall Beef Salad which is explained in the BBQ Sauce Isaan style video tutorial.

There are two delicious sauces you would normally have with Beef Waterfall and they are Thai BBQ Sauce and BBQ Sauce Isaan give them a try yourself.

Khwanjai’s Top Tips:
Reminder: how to make the Waterfall Beef “Salad”  which is served straight after cooking as a warm beef salad.

The salad version is exactly the same until after cutting the cooked meat you dress it again with the BBQ Sauce Isaan Style, and it is eaten as a salad.  The Salad can include anything you like veggie-wise and in our video we just make a very simple salad.

I think it’s pretty clear by now that a nice piece of marbled beef and the marinade is the secret to this one, 30 minutes to soak is an absolute minimum, the longer you leave it the better it will taste and don’t overcook it.

Tastes great when cold too! 🙂