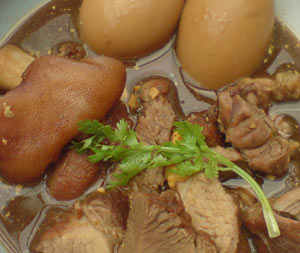 Cinnamon Eggs or (as pronounced) Khai Pa Loor. (AKA “khai pa lo” and “khai pa lor”) This can almost be described as a Thai Soup however it’s a meal in itself sold in every supermarket cafe and in road side eateries all over Thailand.

Think of making a stew with eggs and either meat or vegetables and you’re getting close, it dissolves in your mouth, great if you have no teeth! The one we make in this video/recipe is with Pork but it is just as easily made with Chicken.

It has a totally unique flavour that is difficult to describe. It’s predominantly sweet, but that doesn’t nearly do it justice. Some say it’s an acquired taste, certainly for me, the aroma put me off first time but the flavour hooked me instantly and now I just associate the two as delicious!

This can also be made in a vegetarian version, just omit the meat and replace with Tofu or Potato!

How to Make Cinnamon Eggs 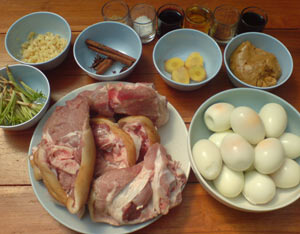 Preparation:
You will need a very large wok and a large cook pot
Hard boil the eggs and leave to go fully cold
Finely chop the Garlic
Wash Coriander roots
Cut Galangal into chunks as per photo

Cooking:
Starting with a hot wok add the oil and then the garlic stirring until golden brown
Now add the Coriander roots, Galangal and Cinnamon sticks stirring briefly and push to one side before adding the Palm sugar to the clear half of the wok
Stir until a brown syrupy texture forms and then sprinkle in the ground Cinnamon, stir it into the syrup
Next comes Seasoning sauce, Chicken stock and Salt and stir everything in the wok all together
Next comes the pork, and stir and turn in the mix until coated then add the sweet dark Soy Sauce and continue turning until all is coated
Now add the eggs end gently turn to coat the eggs in the sauce also about 2 minutes
Now moving to the large cook pot 1/2 filled with 2 ltrs of boiling water add everything from the wok cover with a lid and bring to boil
When boiling allow the lid to vent, leave to boil for 1 hour or more and expect it to reduce by about 30% check and stir periodically
When meat is tender remove from heat and serve

Serving Suggestions:
Thai traditional style is to serve it with bones and skin in place. Depending on your preference, you may wish to cut up the meat and or remove bones and skin before serving. Serve with Jasmine rice of course, this dish is a great accompaniment to so many Thai recipes, but because of its sweet flavours is best served with curries and spicy dishes in general.

As part of a main meal it would be served in a central bowl for all to share. Try our Pork Red Curry or maybe something rich and spicy like Dry Chicken Red Curry (it’s not dry like the name implies, it means no oil or milk is used in cooking) or perhaps a Ginger Chicken Stir Fry.

Theres also a useful bog video about Cinnamon Eggs with Pork to give you a fuller picture.

Khwanjai’s Top Tips:
I reckon they’re all in the video, all I will say is that the ingredients listed in the recipe are the total quantities Khwanjai used including any adjustments for flavour.

There’s one secret ingredient we left out of the recipe… and it’s anise or aniseed, often when you buy Cinnamon sticks from the Asian stores the packets have the anise stars included if you can’t get them this way, get a few separately and add with the cinnamon. You’ll see in the video but here’s an image to help

Sickly Sweet Brown eggs! What? That’s what I thought the first time I smelled the aroma of this dish, it was quite off putting actually, but then I tasted it!

This really is an odd one guys and gals, if you’ve never had it before, please try it, we’ve tested this out on loads of western friends and they mostly react the same way over the aroma. It’s not unpleasant it’s just unusual but definitely worth it for the taste.