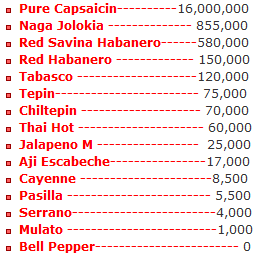 The burning sensation of chillies is caused by Capsaicin, a potent chemical that survives cooking and freezing, but apart from the burning sensation it also triggers the brain to produce endorphins, natural painkillers that promote a sense of well being.

Interestingly the two most famous countries in the world for spicy food and the ubiquitous use of chillies in their cooking are Thailand and Mexico, which in this writers humble opinion are two of the friendliest nations I have ever come into contact with, so my motto is eat chillies, feel good and make friends today. (worry about your bum tomorrow!!)

Back to the serious stuff about Chillies:

In 1902 Wibur Scoville began measuring the strength of capsicum in a given pepper, which originally meant tasting a diluted version of a pepper and giving it a value.

Nowadays it can be done more accurately with the help of computers to rate the peppers in Scoville units, which indicate parts per million of capsaicin.

The Scoville scale begins at zero with mild bell peppers and moves to the lower range of peppers measuring 1,500 to 2,500 such as cascabels, four out of ten.

Chillies are easy to grow, they require minimal area and care. They will do best in warm climates or under glass with a long growing season and can be kept over winter in the right conditions.

Many varieties make excellent pot plants and can be grown indoors as ornamentals although these are still edible. Be careful when growing different species close together as they will cross pollinate and produce hybrids, therefore do not keep these chilli pods for next years seeds as the required heat of the chilli may be effected by crossing with a hotter chilli

Nowadays it can be done more accurately with the help of computers to rate the peppers in Scoville units, which indicate parts per million of capsaicin

0 comments… add one
Get Prepared
Cinnamon