You may already know that cinnamon is good for you, but did you know there is a mythological creature called the Cinnamon Bird? Or so I heard!!

Did you know that it is tree bark? Pictured below with Anise seeds (Aniseed) 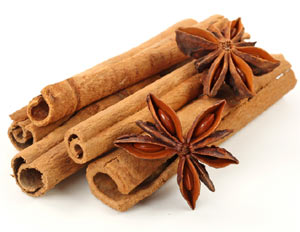 Here are some interesting facts and trivia about this extraordinary spice

There was an ancient belief in something called the Cinnamon Bird that supposedly lived in Arabia and used cinnamon to build its nests.

Herodotus wrote that these birds flew to an unknown land to collect the cinnamon and took it back with them to Arabia. The Arabians got the cinnamon from the birds by tempting them with large chunks of raw meat. The birds took the heavy pieces of meat back to their nests, which caused the nests to fall and the cinnamon to rain down and be collected by the people.

Pliny the Elder wrote that the Cinnamon Bird did not exist and was a tale invented to raise the price of cinnamon. Probably true!

Pliny also wrote that 350 grams of cinnamon were equal in value to five kilograms of silver. Very True!!

The spice was also valued for its preservative qualities for meat due to the phenols which inhibit the the bacteria responsible for spoilage, with the added bonus being the strong cinnamon aroma masked the stench of aged meats.

Cinnamon (Cinnamomum verum) is a tree belonging to the Lauraceae family. The bark of the tree is what is used as a spice.

Cassia, a related spice, is sometimes sold as cinnamon but it is not “true cinnamon.” Cassia is sometimes called “Indonesian cinnamon” or “Chinese cinnamon.” In fact, most powdered cinnamon sold in the United States is actually cassia. It is harder to find true Ceylon cinnamon.

Cinnamon gets is scent and flavour from a chemical compound called cinnamaldehyde.

The word cinnamon comes from the Greek kinnamomon.

Cinnamon is mentioned in Chinese writings as far back as 2800 BC.

In the book of Exodus, God instructs Moses to make a holy anointing oil out of cinnamon, cassia, olive oil, myrrh, and hemp. (Exodus 30: 22-33).

In the 17th century, the Dutch seized the world’s largest cinnamon supplier, the island of Ceylon, from the Portuguese, demanding outrageous quotas from the poor laboring Chalia caste. When the Dutch learned of a source of cinnamon along the coast of India, they bribed and threatened the local king to destroy it all, thus preserving their monopoly on the prized spice.

In 1795, England seized Ceylon from the French, who had acquired it from their victory over Holland during the Revolutionary Wars. (In the Victorian language of flowers, cinnamon means “my fortune is yours.”)

However, by 1833, the downfall of the cinnamon monopoly had begun when other countries found it could be easily grown in such areas as Java, Sumatra, Borneo, Mauritius, RÈunion and Guyana. Cinnamon is now also grown in South America, the West Indies, and other tropical climates.

In Ancient Egypt, cinnamon was used in the embalming process.

The Egyptians also used cinnamon medicinally and as a flavouring in food and beverages.

Cinnamon was used on funeral pyres in Ancient Rome. In 65 AD, Nero burned a year’s supply of cinnamon at his second wife Poppaea Sabina’s funeral in order to show the depth of his grief….

Or was it guilt for murdering her. Stories vary!!

In the Middle Ages, cinnamon was only affordable by the wealthy elite of society. A person’s social rank could be determined by the number of spices they could afford.

Cinnamon has many health benefits. It has shown promise in the treatment of diabetes, arthritis, high cholesterol, memory function, and even leukemia and lymphoma.

Two teaspoons of cinnamon has about 12 calories.

Most of what we call cinnamon is actually cassia. In western countries, approximately six times more of the milder tasting cassia is used than ìtrueî cinnamon. Both are basically the same plant, cassia is native to Vietnam and the eastern Himalayas while cinnamon is native to Ceylon (AKA: Sri Lanka) and southern India. The Food, Drug and Cosmetic Act of 1938 permits spice traders to label cassia as cinnamon.

Like so many of the great spices, they are harvested from evergreen trees but in the case of cinnamon and cassia, the bark is harvested rather than the fruit. A special knife is used to cut strips of bark. The outer, cork-like, layer of the bark is scraped off and the strips are left to dry. As they dry, they curl into the ìquillsî we know as cinnamon sticks. The finest cinnamon comes from Ceylon, the finest cassia, from Saigon. Most of our cassia is imported from Indonesia. When ground, true cinnamon takes on a tan colour and cassia becomes the familiar reddish brown powder.