Best made with toasted peanuts

Satay sauce, often referred to as peanut sauce is a sauce widely used in Thai cuisine, Malaysian cuisine, Indonesian cuisine, and Chinese cuisine. (under different names) It is also used in some European cuisine.

The key ingredient is peanuts which together with kecap (soy sauce) gives it a salty and mildly spicy taste. Many different recipes for making peanut sauces exist, which means that all these satay sauces taste differently.

A home-made recipe too often contains peanut butter (smooth or crunchy), plus milk (coconut milk/low fat milk), kecap (soya sauce), and spices (such as ginger and others to make it spicier). Some peanut sauces also contain fried onions, sesame seed, olive oil or dare I say it again peanut butter.

Initially the sauce was meant as a sauce for satay, a dish comprising sliced or diced meat served on skewers having first been barbecued. Most believe that satay was invented by Chinese immigrants who sold the skewered barbecue meat on the street. It is also possible that it was invented by Malay or Javanese street vendors influenced by the Arabian kebab. The explanation draws on the fact that satay only became popular after the early 19th century, also the time of the arrival of a major influx of Arab immigrants in the region. The satay meats popularly used by Indonesians and Malaysians, mutton and beef, are also traditionally favoured by Arabs however, in Thailand or China the natives prefer pork and chicken.

My personal belief is that they came form China to Thailand around 200 years ago, which agrees with the first part of that story, but the fact that Thailand, like China also prefers pork and chicken satay kinda proves it for me. Indeed the Malays and Javanese street vendors may have been introduced by Arabs but that is not the most likely original influence for Thailand, especially when you consider how much of Thai cuisine was influenced by Chinese immigrants all those centuries ago. Stir frying and spring rolls are most certainly of Chinese origins

In the Netherlands, peanut sauce has become a common Dutch side dish and is usually eaten with meat (barbecue) or chips, (but hey, the Dutch put Mayo on everything else too, I know I’ve lived in Holland). Peanut sauce is also eaten with a baguette, bread, cucumber or potatoes.

In Singapore, peanut sauce is not only used as dipping sauce for satay. It is also eaten with rice vermicelli known as Satay bee hoon

So there it is the history and the truth about Satay Sauce! Well almost…..

In Thailand, no self respecting, practising chef would ever dream of making it with peanut butter, God perish the thought!

Now I sincerely hope I haven’t offended any deeply religious readers by saying that, but I am constantly amazed when I see so called top chefs using it. It does require a little extra effort to make using real peanuts, but the finished sauce is worth every ounce, every second and every bead of sweat of effort when you taste it. Don’t take my word for it though invest the effort just once and I know you’ll agree with me 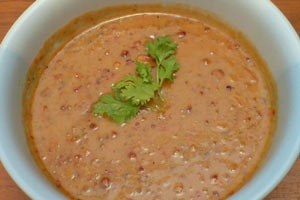 One last thing, Traditional Thai Satay Sauce is served with Chicken or Pork Satay and is quite, well textured and in Thai cooking, texture is important however, if you prefer it to be smooth, just blend the peanuts until they turn to paste, the unique flavour comes from toasting them before hand, especially when it combines with the other ingredients

Equally important in Thai cuisine are the complimentary dishes, so chicken or pork satay have “saus satay” and “saus nam jime arjad”, it’s a triumvirate of complimentary and contrasting flavours, textures and aromas, fantastic when eaten together, try it!