The most famous Thai soups are probably… 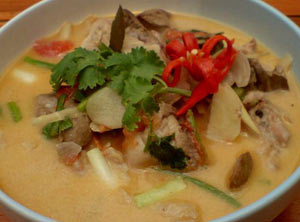 Coconut Chicken Soup “Tom Ka Gai” and Thai Prawn Soup with Lemon grass “Tom Yam Goong.”
There are many other styles of soup in Thai cooking, and I suppose it could be something to do with the heat and the need for hydration that you find Thai soup is eaten every day, so the need for such a varied choice arose.

Thai cooks can make a soup out of anything, whilst in England “khwanjai” (my Thai wife) even made a very tasty soup once, using tinned “sardines in tomato sauce” because she couldn’t get fresh sardines and Thai’s don’t even consider wasting food! 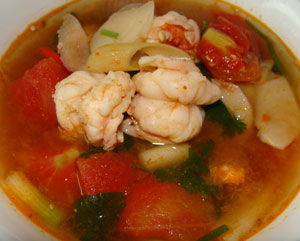 A traditional Thai meal is a collection of many different dishes served simultaneously rather than in courses, you won’t generally find soup in the starters heading on your menu. (if indeed they have such a section)

The other thing I find peculiar to Thai dining, (in many restaurants of my experience) is the the food doesn’t arrive in any particular order. It seems to be up to them and often a “Falang” (foreigner) will order the various (perceived) courses including soup and the soup is the last thing to arrive and I mean last.

However, if youíve been handed a bowl of liquid grub and a Chinese-style soup spoon, although Thai style is a metal spoon rather than the Chinese (crockery) version, a fortune teller would lay odds there’s going to be a soup in your immediate future.

Thai dining style would mean a communal bowl rather than individual serving bowls for most watery curries (gaeng). Some gaeng make you feel you want to eat something with them besides rice, but there is always something else on the table to tantalise your saliva glands.

The fresh ingredients used in this spicy Northern and Central Thai curry-style soup, include a fragrant blend of peppercorns, green or black, pieces of freshwater or dried fish, leafy greens such as pumpkin tendrils, banana blossoms, snow-pea shoots, and an assortment of fresh vegetables such as baby corn, cauliflower and large pieces of gourd, even pumpkin.

With the oldest dishes in Thailand, there is no such thing as a definitive recipe for any famous fare. Quantities are rarely given in Thai recipes because every cook has their own particular idea of how a dish should taste.

Khwanjai’s traditional recipes written in Thai, only say “add some or enough of this or that” we have added quantities to our recipes to give you a basic idea, but they are always, only guidelines, personal taste can come into it too.

Itís made with the traditional Thai aromatics – Galangal, lemon grass, kaffir lime – combined with tiny chillies and chilli paste. Other types of fish besides Goong (prawn) can be added, and certain versions incorporate coconut cream in the soup. Though the name translates as ìboiled mixtureî (tom means boil and yam, toss or mix), this spicy soup is anything but bland.

Coconut milk/cream features heavily in another Thai standard, Coconut Chicken Soup (Tom Ka Gai), literally boiled Galangal with chicken. The richness of the coconut cream, slightly separated by boiling, combines with the taste of Galangal and mitigates the sourness of the lime, creating yet another perfectly balanced Thai combination of disparate flavours. Yummy!