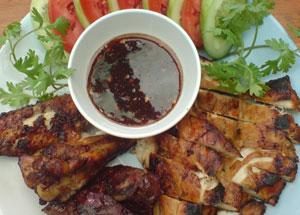 Just look at this BBQ Chicken!” AKA: Gai Yaang!  If you have ever been to Thailand you will have seen this sold on practically every street corner in any town or city.  Vendors even hang the hot charcoal burners off the back of motor bikes and sell their chicken to passers by.

Again if you have visited you will know they all have their own chicken bbq recipes, some are great some are not, some give you all the rubbish bits of chicken and they all use different marinades, some will give you a dipping sauce also, many are not so great for western tastes!

In this recipe for BBQ Chicken we cook a whole chicken for a family barbecue, which will feed 4-6 folks when served with sticky rice and other traditional fare.  Khwanjai shares with you, her own marinade plus her own special Barbecue Sauce, which is a separate recipe because it goes so well with anything barbecued.

How to BBQ Chicken Thai Style 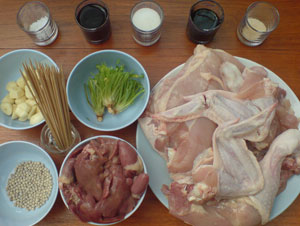 Preparation:
Cut Chicken into portions first and perform final cuts as per video
Do the same for the chicken livers and hearts and place them all in a large bowl ready for the marinade
Peel and cut Garlic into half cloves or less
Clean and partially chop coriander roots (use just stems if you can’t get the full roots)

Using a Cruk Sak (Pestle and Mortar) pound the peppers, coriander roots and garlic as per video
Blender?  Our advice?  Don’t do it!  Be very careful not to over do it if you use a blender, we really recommend NOT using one, its doesn’t bring out as much flavour as pounding and also ruins the texture.
You should end up with a moist aromatic pulpy texture (see video) which you add to the cut chicken and livers
Next add the chicken stock powder, seasoning sauce, sugar, salt and dark sweet soy sauce mix well together by hand
Leave to stand for minimum 20 minutes

Barbecue Time:
You need a mature barbecue ie. Not too flaming hot!
Plonk on your pieces of chicken and turn every 3 minutes or so, unlike western style bbq methods these require much shorter cooking times to cook the meat through thoroughly whilst still leaving it moist and succulent
Thread you chicken liver pieces onto bbq sticks and cook turning carefully as they can break or stick
Do the same with the hearts, these are traditionally put onto bbq skewers in threes, separately from the livers
Also thread wings onto sticks as per video to ensure even cooking

Serving Suggestion:
Serve up on a large plate with some coriander, sliced Tomato and Cucumber, and a small bowl of the delicious Spicy Sour Sweet BBQ Sauce you can even serve it with hot Jasmine rice but here’s a different very traditional suggestion.

Thais will often share a BBQ like this over a beer or whisky and chat as they dig into this very tasty BBQ Chicken dish.  When served with rice as part of a full meal they will typically serve it with Sticky Rice, Green Papaya Salad aka Som Tam or Laab Gai (Hot Chicken Salad)

To get a better idea visit Thai Food Blog and discover more about this Chicken BBQ Thai Recipe. There’s also the Thai BBQ Sauce lovely with this and many other Thai BBQ dishes

I’ve tried this all over Thailand and nothing even comes close to Khwanjai’s version.  As you will see we haven’t dumbed this down from the traditional Thai street vendor style, although we do suggest ways you can

I also get my opinion changed about chicken hearts, which I have never liked.  I have eaten them countless times when at a road side bar, getting half cut before I even try them, (Oi buys them and forces them on me!  Cruel to me she is!) and they have always left me grabbing for the bottle.

Khwanjai’s Top Tips:
The marinade is the most important part of the preparation, leave the meat to marinate as long as possible before cooking

You really do need to cut the chicken as per Khwanjai’s method so it can cook quickly or it will go very black, it’s the sugar and sweet soy in the marinade, watch and you’ll see..

Questions,comments go below and for goodness sake share this with your friends…